I’ve mentioned before, on this blog and elsewhere, what incredible value Brandon Sanderson’s YouTube lectures are to new writers. I had no formal training in writing, what with my background in Physics as well as Computer Engineering. It was the Sanderson lectures that helped me take a hobby and craft it into something more serious. The problem, I found, is they are split across four different channels, some are divided into pieces, years are skipped, and few have notes or details.

Several years ago I undertook the side project to gather all these lectures into one place. Things got in the way, and the project stalled a bit, but I have finally managed to post everything.

I tried to go a bit further than just mirroring the videos. I applied color correction to many of the series, as well as correcting the aspect ratio and combining separated parts of single lectures together:

Several of the later videos fell victim to my audio tinkering as well, in what I hope improved the sound quality (in 2014 in particular, the sources were sometimes rather badly lacking in audio).  Furthermore, for the 2016 “canonical” series, I’ve even transcribed the whiteboard in an overlay to the video to help translate the otherwise impenetrable “Sanderscript.”

Finally, I’ve gone to some lengths to take notes of the lectures and post them in the video descriptions, providing links and references from the lecture, and giving viewers the ability to jump to the relevant parts of the lecture: 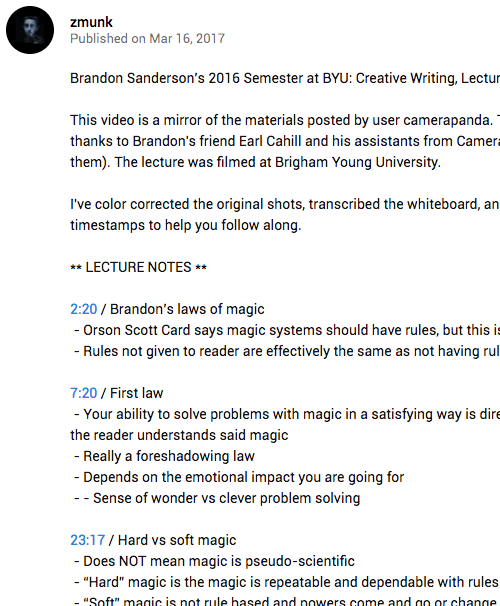 This last step is what really held me up, and as the gap between videos yawned wider, I did crack a bit. For the 2014 and the latter half of 2013 series, I’ve gone ahead and uploaded them without any detailed notes. I fully intend to get around to them all in due course.

Oh, and of course, I didn’t monetize anything (and preserved the original Amazon affiliate links when I mirrored any such links from other channels).

So, here they are:

All lectures, in chronological order: https://www.youtube.com/playlist?list=PLSTzdBlo5WBDYapYaDq4A0cgQDk2CWhRD

Or, if you want to go series by series, here they are broken out:

As far as I am aware, there is no published series for 2015 nor 2017, but I will keep an eye out. I did not collect any one-off lectures or short lectures that were part of book tours.

I sincerely hope this library helps you as much as it has helped me. Now….. Back to writing!