Brandon Sanderson has started posting his 2016 lecture series on YouTube. As he described in a blog post on his website, the original lectures from 2012-14 were mainly to help a student on a small nothing project, and yet they have inadvertently become a major part of his web presence.

This time around, he brought in some semi-professional videographers and decided to make the “canonical” version of his BYU lecture for the inter-webs.

I’ve started the process of mirroring these lectures, hopefully enhancing them as I go. As always, I am not monetizing or advertising on these videos… I’ve retained the link to camerapanda.com (the videographer) in the video notes with an encouragement to viewers to support the site.  In addition to mirroring, I’ve color-corrected the originals (they needed it… but unfortunately the camera cuts made this QUITE a project), I overlay a transcription of the white board to help translate Brandon’s notorious handwriting, and I’ve collected some timestamped notes in the video to help people follow along.

Hope this is useful to people. Check the playlist or subscribe to my channel for updates. The first video is available, which puts me about two weeks behind with the originals, so I’ll try to keep up with one per week.

I am one of those nerds who jumped on the Apple Watch fanclub, stayed up until midnight, and made it into the second delivery group for my Stainless Steel 42mm Milanese watch.  After a lot of trolling macrumors.com, the watch finally arrived, and so the first thing I did was…. send it off to a stranger to dip it in chemicals to slightly alter the hue of the material.

In fairness, it was also done in solidarity with a fellow forum member, who decided to start this company with the support and prompting of the macrumors community (myself included), so I was more than happy to contribute.  I was order #11, and us early birds, he gave us a $100 kickback if we would help spread the word on social media.  Being a student of VFX, I decided to play with youtube, and see if I could come up with something.

It turned into a bit of a project, including watching a lot of this guy, to learn how to photograph jewelry.  And of course, a lot of hours on videocopilot.net.

The folks at WatchPlate.com add a plating of 35 micron of 24K gold, which is much more than normal jewelers use, and hopefully means it will last longer.  [ UPDATE: In order to match the hue of the Edition more closely, WatchPlate.com is now using an 18K plating process, rather than the 24K depicted here. ]

Here is the video I posted to youtube.  I am particularly proud of the intro frame, made in AfterEffects.

This is what my photograph rig looked like when it was done… it is totally hacked together with paper taped to an old 5-arm light I had in college, and a sheet of yellow colored-paper to act as a reflective bar: 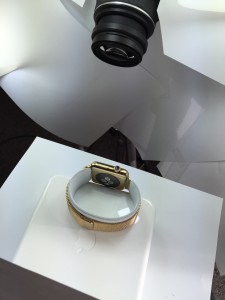 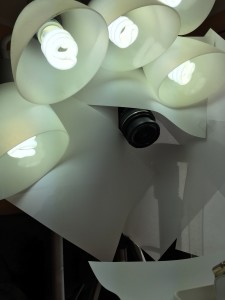 The results were quite good, if I do say so myself.  As close to professional as you can get from a couple lights, an empty bucket, and a Sony camera.

This is a tour of the Hogwarts campus I made a few years ago. The grounds and castle are modeled based on the Harry Potter books (not the movies, sorry), and follows the maps / layout / description provided by J. K. Rowling.  I’ve been playing with Maya for a few years, but I am obviously not a pro.  Anyway, wanted to share.